Summary: Before the Miracle at Minute Maid starts, Salvador Perez crushes an opposite-field home run to give the Royals an early 2-0 lead.


When Salvador Perez was young and new to the major leagues, he crushed opposite-field home runs with some regularity. But over the years he has become far more pull-happy with his home runs, and not coincidentally, his batting average has dropped from .331 to .301 to .292 to holding steady at .260 the last two years. Compare his spray chart from 2012 to the one from 2014-15: 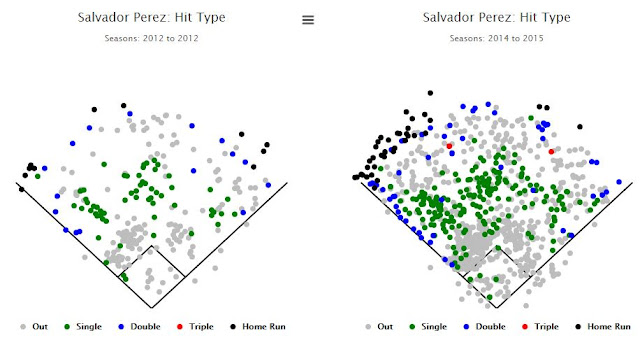 So it was a very pleasant surprise, and a very welcome relief, when Perez opened the scoring in Game 4 of the 2015 ALDS by hitting a 97 mph outside fastball from Lance McCullers on a 1-2 count deep into the right field seats. It came with a man aboard, and were the only two runs the Royals had scored before The Miracle started in the 8th. His home run has been forgotten by all the drama that followed it, but it was enormous in the moment, and even more significant in retrospect. The Miracle only happened because Perez’s home run meant they still had a prayer to begin with.

This set of ten Moments includes two key moments in a five-run inning against David Price, two enormous strikeouts with a pair of men on base, two huge plate appearances from the 8th inning of the Wild Card Game, the first three at-bats of the Miracle at Minute Maid, and concludes with what was then the biggest Royals moment in 29 years. And we still have 60 Moments to go.

Summary: Ben Zobrist lofts a pop-up that Ryan Goins and Jose Bautista allow to drop between them. But there was no one on base and the Blue Jays led 3-0 and David Price was on the mound, so what was the worst that could happen?


There are a lot of Moments on this list, but this might be the only one that involves the Royals’ hitter throwing his bat down in disgust after putting the ball in play.

For a quarter century, it was the Royals that allowed routine pop-ups to turn into singles. For pretty much the entirety of the Allard Baird Era in Kansas City, I was terrified by every pop-up that was hit between the infield and the outfield – and with good reason. Do these names bring back any painful memories: Chip Ambres…Kerry Robinson…Terrence Long?

But just as the 2014-2015 Royals bulldozed through the postseason, they were turning the tables on the franchise’s own history. Now it was the other teams making silly mistakes, and it was the Royals who were taking advantage. Now it was the Royals who were hitting the pop-ups, and their opponents who were letting them drop for singles. On a Saturday afternoon at Kauffman Stadium, in Game 2 of the ALCS, Ben Zobrist led off the bottom of the 7th inning against David Price, who after allowing a single to lead off the game had retired 18 batters in a row. Zobrist skied the first pitch to right field and flung his bat to the ground.

Who says home field advantage doesn’t matter? If the Royals hadn’t retaken the league’s best record from the Blue Jays during the final weekend of the regular season, they wouldn’t have been at home for Game 6, when they got a pair of questionable ball-strike calls to go their way in the 9th inning. And they wouldn’t have been at home for Game 2, when a raucous home crowd made it difficult for second baseman Ryan Goins and right fielder Jose Bautista to hear each other, and then one of our own (I’m convinced this happened) called out “I GOT IT!” and confused Goins, who let the ball drop.

(Addendum: as astute reader Chris Esch reminded me, in the middle of the 7th inning, the Royals played their well-known clip of Royals fan Eric Stonestreet (along with co-star Jesse Tyler Ferguson) - in character as the flamboyantly gay Cameron Tucker in Modern Family - rooting on the Royals and exhorting the fans to "Let's make some noy-oyse!" But then Crown Vision went live to Stonestreet, sitting in the stands and taking in the game that afternoon. That definitely added a buzz to the crowd, which hadn't worn off by the time Zobrist hit the first pitch, and the crowd noise was undeniably a crucial part of this play. So let's give an assist to Stonestreet. As a reward, he can pelt Jimmy Kimmel with a paintball gun.)

The Blue Jays had made a mistake, but it was still up to the Royals to make them pay. The Royals would make them pay. By the time the inning ended, they would lead, 5-3, making it the Royals’ most dramatic postseason comeback since…well, since Monday.